The DELPHIC ART WALL is a multimedia Arts and Culture project, where students between the ages of 6 and 17 years, in context with the European Year of Cultural Heritage 2018, were called to present and create their ideas, wishes, and dreams, in public, of a united Europe, in analogue and digital form.

The cultural diversity in Schools, due to the migration movement, has increased significantly over the last few years. Unfortunately, this catalyst in our “Greenhouses of the future” is seldom shown in our societies. Lively inclusion means using opportunities together and questioning even our cultural heritage, so as to live responsibly today and to refine a future for tomorrow.

“Europe – united in diversity”. This can be realized through realistic drawings, or expressive paintings, Graffiti, Comic style or Tape art – the language of arts expressed, is manifold, like the students themselves. On 1,80 m high x 1,18 m wide canvases the ribbon will showcase the visions and diversity of the participants.

In the true spirit of the modern times, the communication will be through the social media, using the best techniques to reach out to specific geographic locations and communities in their languages.

Within the European context, these discussions about the own identity and the identity of other people and the collaborative understanding functions significantly, are the reason to use the project as a model for presentation and better understanding.

For documentation reasons the students have to use their own Smartphone’s. Prior to that, they should receive an introduction in the basics of film design / camera movements by their guiding teachers. For implementation there will be one DIGITAL ART BOX per school, containing a notebook including software, selfistick, as well a digital recorder.

For the supervising teachers a preliminary workshop should be arranged. The students should cut the film themselves. A final summary will be arranged in a final common workshop of all participants. Alternatively, the wall and presentation can also be arranged by an organizing office.

A possible extension of the target group of all 16 federal states with always 12 schools could be considered. With this the project would have a model character and a German wide and Europe wide reflection. Symbolically the number of twelve stands for the perfection and completion being in many cultures a sacred number.

In ancient Greece the 12 tribes of Greece (Amphictyony) organized the Delphic (Pythian) Games, setting with this the platform for justice and peace. The Amphictyony is considered as pre-runner of the UNO.

The kick-off event took place on October 4th, 2017 at the Federal Academy for Security Policy, Schönhausen Palace, Berlin-Pankow. Dr. Klaus LEDERER, Mayor and Senator for Culture and Europe took over the patronage.

This place has made history:

At this historic place students of the Rosa-Luxemburg-Gymnasium together with the experienced pedagogue and project manager Daniel SCHMOECKER presented the first banner of the Delphic Art Wall. In the school year students from 12 Berlin schools in the 12 districts of Berlin are invited to design their banner with the theme “Europe – united in diversity”. 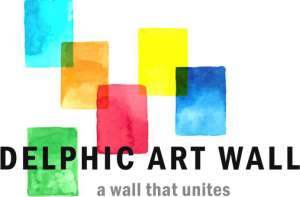